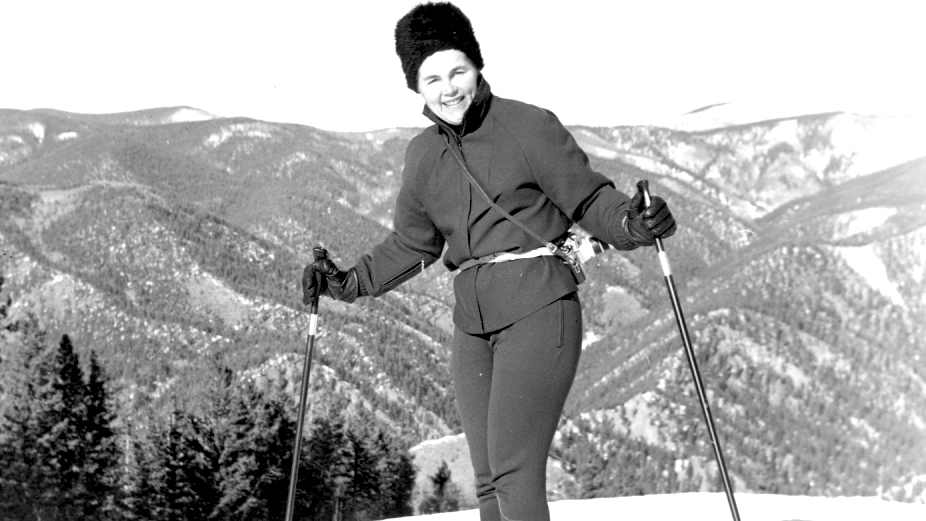 A survivor of World War II, devoted wife and mother, founder of Sitzmark Sporting Goods and symbol of Red River who skied into her 70s and 80s, Ilse Spemann Woerndle died May 1, 2013, at the age of 92, after struggling through the winter with a congestive heart condition. In spite of her illness and in- sufficient oxygen at this altitude, she refused to leave her beloved Red River.

Born in Stuttgart, Germany on August 7, 1920 to Adolf Spemann and Ernestine (“Ina”) Schulz Spemann, as the youngest of four children, Ilse lived her early years in Stuttgart with her family, learning her father’s book publishing business. As a teen, she worked in the German labor camps, that were mandatory for all teenagers, and became a concert violinist. Ilse learned heartache and tragedy firsthand, losing her two older sisters, Rotraut Spemann and Gerda Spemann, and her first fiance’ during the World War II.

After the War, she met her future husband, Anton (“Toni”) Woerndle, while hiking in the German Alps near Toni’s home-town of Garmisch-Partenkirchen, Bavaria. Much to her parent’s initial dismay, Ilse and Toni were married on June 14, 1949 in Stuttgart, Germany. Together, they forged a new adventure and a new life after immigrating to America in 1951. They arrived in New York by ship, and spent what little money they had buying vending-machine sandwiches and train tickets to Denver, Colorado, where they were met by friends from Aspen, Colorado who had immigrated some years earlier.

Once in Aspen, Toni found work as a ski instructor and plumber, while Ilse washed dishes at the famous Red Onion. After a few years, they were able to scrape together enough money so that together with a loan from a local benefactor, they were able to purchase an old miner’s cabin on the far East end of Aspen, which they turned into a small bed and breakfast, their first Alpine Lodge. On August 6, 1957, Ilse and Toni became naturalized citizens of the United States.

In 1959, Toni was invited to join his Aspen Ski Corp. boss, Buzz Bainbridge, in Red River, as the first Ski School Director. Ilse stayed behind in Aspen that Winter to continue running the lodge. By the Spring of 1960, Toni was able to convince Ilse to move to Red River, where he intended to purchase the S. E. B. Motel from Stokes Bolton, who had built the ski area in 1959 and built the motel directly across the river. Through vision, daring, fortitude and hard work, Ilse and Toni converted the square, flat-roofed cinder block buildings into an alpine retreat, their second Alpine Lodge.

Ilse was fundamental to this process, drawing designs for the buildings, adding a restaurant and bar, which were local and tourist favorites for decades, a ski rental shop and ski clothing shop, and continuing the operation of the movie theatre. Ilse also designed the infamous “Ed Iver” ski pin in the early ‘60’s and was instrumental in getting the Junior Racing Team outfitted every winter. She will always be remembered for her out-going and positive spirit, for extending a hearty welcome to all (new guests and returning guests) and her famous New Year’s Eve parties for the teens of Red River. She treated everyone equally, even telling then Pres. Lyndon B. Johnson’s daughters that they would have to wait to be seated for dinner just like everyone else. Ilse lived life and died on her own terms. We should all be so fortunate.

Throughout her life, Ilse was a force to be reckoned with, always out-spoken, reaching out to others, reading endlessly about world events, the arts, finances, preventative medicine, and meeting life head-on.

After the town began to swell with more visitors and Ilse and Toni had more inventory than their small store could manage, they purchased the building that would become Sitzmark Sporting Goods.

In 1976, with their ski rental business growing too big for the little shop at The Alpine, the Woerndles purchased a building across the street that for years had housed a grocery store and opened Sitzmark Sports in 1977.

Ilse lost the love of her life, Toni, after a short battle with cancer on November 19, 1981. She returned to the business and continued its operation until selling the business and retiring in 1994. During the intervening years, she enjoyed traveling, and playing host at her home on Rose Hill.

Susan Hogrefe, a Sitzmark manager and friend of Ilse for a couple of decades, spoke about her late friend.

“She was definitely a hard worker, a stickler for detail,” Hogrefe said.

Hogrefe said Woerndle “always came by the store and checked in all the time” even her mid-70s, but she could not be found on one particular day.

“She didn’t tell anybody she was going anywhere, and it was very unexpected for her not to come by the store at about 4 p.m.,” Hogrefe said. “She came by later, and I asked her where she had been all day. And she said ‘It was such a nice day, I decided to climb Wheeler Peak’ — by herself.”

The characteristics of selflessness and charity are hallmarks of Ilse’s legacy.

“She was just always very involved and always dressed up. And for Oktoberfest she would dress up in her dirndl, a ladies German dress,” Hogrefe said. “For the Century Tour, she would ring her cowbell when everyone crossed the finish line.”

“It’s a proclamation the town does for special elders when they pass away,” Hogrefe said. “She was one of our icons. Her smile is what I’ll miss the most.”

Many of you may have met Gerdi this past Winter as she stayed with Ilse through the Winter and gave her such wonderful loving, daily care.

The family would like to thank all of the Red River community for taking such good care of Ilse and showing her so much love in her later years, and special thanks to Dina and Ron Burnham, Jessica Cross, Susan Hogrefe, Priscilla Heglund, Dr. Jaramillo, Dr. Bassett and her nurses, Candace and Tasha at Holy Cross Hospital for their wonderful care.