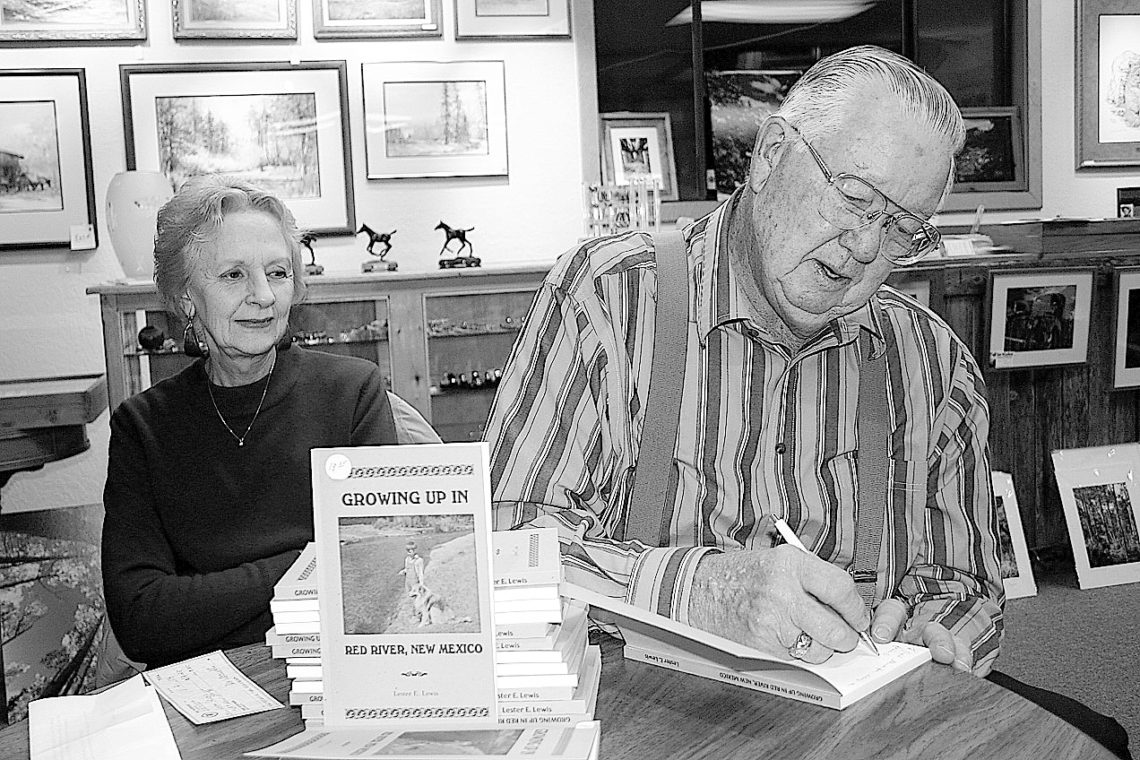 How many of us can remember the simple joy that comes from having electric lights and indoor plumbing? Lester Lewis can. In his memoir “Growing Up in Red River, New Mexico,” Lewis recounts the day his father, sick and tired of using coal oil and gas lights, rigged two six-volt batteries to a small generator and six-volt lights in their rustic Red River home. “The first time I ever saw electricity coming out of a bulb, it was great. You just don’t know how good it made me feel to flip a switch and have a light bulb come on.”

Same with their first shower his dad rigged that pumped water out of the river and through a gas heater. “Boy that was great,” Lewis writes. “You could take a bath, stand up, wash your hair and not have to sit there in a dadgummed ole #2 tub with your feet on the floor with very little of you in the water.”

As its title states, “Growing Up in Red River, New Mexico”is the story of Lester’s life in Red River — from the time L.S. and Jessie Lewis brought their family to Red River in 1936 when Lester was 5 years old.

Picture an old timer, his feet up on the stove in the general store spinning yarns about the old days — that’s how the book reads, thanks to the efforts of Rochelle Lacy who transcribed, pretty much verbatim, Lewis’ reminiscences, and Kerry Shepherd who edited … though, thankfully, not too much!

Lacy writes in a foreword, “I’ve tried to leave most of Lester’s flavorful speech patterns and grammar in place so you get the feel of him actually telling the stories.…”

As a result, occasionally the writing is a jumbled mess but as Lacy said, “never boring.”

Getting by in Red River

Lewis recounts how his dad bought 110 acres from what is now the River Ranch at the west end of town to the Black Mountain Playhouse on Pioneer Road.

The resourceful elder Lewis built seven small cabins for the Lewis Ranch (River Ranch) with wood he milled himself. To power his sawmill, Lewis and Burt Phipps drove a steam engine from Dawson to Red River, about 85 miles, Lester recalls. “It took them about 10, 11 or 12 days to drive that thing to Red River.”

Lester said everyone from Red River to Eagle Nest came to watch his dad drive that steam engine down the old Red River Pass. “Everybody thought, “Well, he’s gonna run it over that pass.”

L.S. solved the problem by backing down and using the resulting compression to go slow.

In the book, Lester relates his father’s many business ventures — from the Cliffside Cabins to the Playhouse to the “first utility company” in town — a diesel engine he used to provide electricity for the Playhouse, Pioneer Lodge and the Three Canyon Camp.

In the ’30s, the Playhouse was a gambling operation with a 6,000-square-foot dance hall and bar. Lester shares stories of “head gambler John Dunn and Red River’s “wild and woolly” days when his dad was a deputy sheriff who’d let ruffians cool down by handcuffing them to trees all night.

Later L.S. Lewis converted the Playhouse into a four-lane bowling alley and skating rink. He also offered horses for rent and sold milk from two or three milk cows. Lester and his siblings had to milk every day.

Winters they’d cut ice off Tall Pines Lake and store it in an ice house to sell in the summer for two cents a pound.

“We worked hard,” Lester says. “If it wasn’t for being able to poach a deer once in awhile we’d have probably starved to death!”

In his book, he recalls attending school at the Little Red Schoolhouse and later the molybdenum mine’s school — taught by Red River’s Winnie Hamilton.

The family’s business ventures didn’t stop with L.S. Lewis’ schemes — and Lester shares ’em all, but the best part of the book comes from his anecdotes like the one about a hunting trip in which his brother and Slim McCombs accidentally shot a doe. “They put the deer in the cab of the truck and put a coat and hat on this deer and drove him through town to the ranch.”

Another time Lester and a pal decided to “get even” with an old guy named Munden. “One evening we went to his place and moved his outhouse back about 3 feet.… When he walked outside, of course, he didn’t know it had been moved and walked right into the pit.… Boy, was he mad.”

Want to know what a “wild cow milking contest” is? It’s in there. So’s the tale of Lester’s romance with Jan, his wife of almost 50 years, and their children Laura and Brett — both of whom picked up the Lewis family’s entrepreneurial spirit… and their father’s penchant for practical jokes.

One Halloween, Lester writes, the kids, with a group of friends, decided they’d had enough of the cantankerous owner of the Texaco station so after the fellow closed up for the night, “the kids got together and slipped up to Harry’s mobile home and started throwing eggs at his place. Harry come outside with a shotgun, cussin’ and ranting and raving and scared all the kids.…”

Times they are a changin’

Lester must have known Red River was changing the day he stopped in the middle of State Highway 38 “which was this dirt road” to chat with a fellow about a new addition to his house. A State Police officer “pulled me over to the side and pulled his dang ticket book out and that sorry sucker gave me a ticket for stopping in the middle of the road.… So I guess I was the first citizen of Red River to get a traffic ticket. I think it cost me $25, which in those days was big dollars.”

Lester takes his readers from the first days at Red River Ski Area to his own Powder Puff Mountain ski area with its “whirley bird” sled run and the boxcar lift that hauled everyone up for another ride.

He was in on Red River’s incorporation as a town — as one of its first councilors — and was chamber of commerce president, too.

The book includes lots of details — some of which might be lost on an outsider without a passing familiarity with Red River’s history. That’s okay, they can skim over those parts. Old timers are probably already quibbling over his recollections anyway.

The rest of you can pretend you’re in that general store — and enjoy the stories.