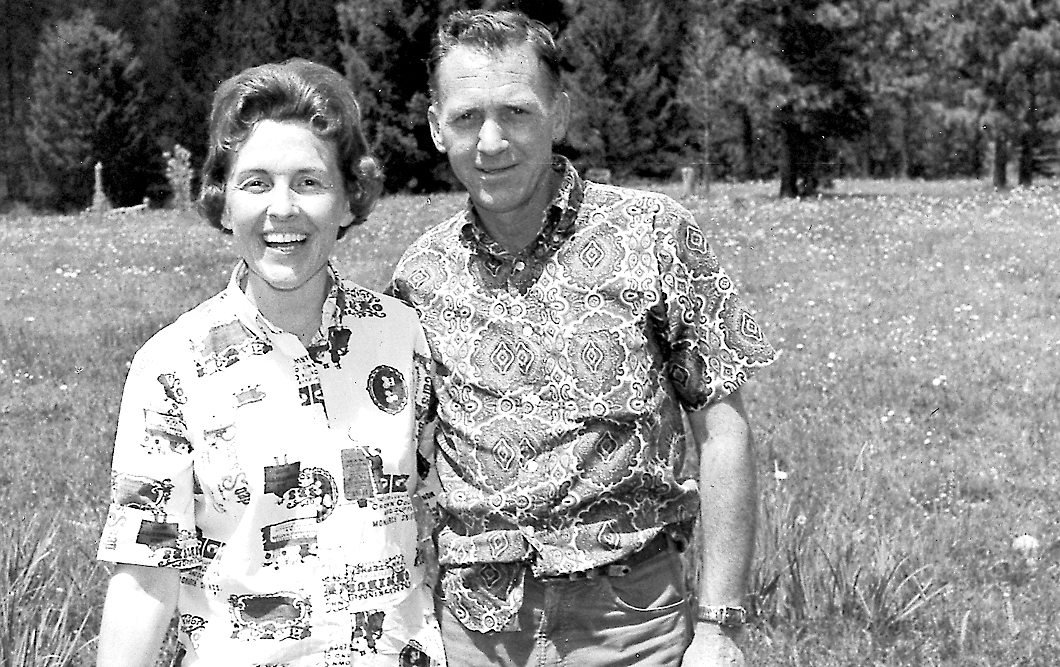 Jeannine Neal had a welcoming smile that, along with her natural ease, made anyone who met her feel instantly welcome, instantly a friend.

“Her hospice doctor wrote a note saying she was ‘a special lady with a beautiful smile,’” said Neal’s oldest daughter Lynn Shields. “And that was when the pain was just awful. She was a social, outgoing person.”

She was born Aug. 20, 1930, to Laura (Heck) and James MacDougall. The Heck family owned several ranches, including Moreno Ranch (from just outside Elizabethtown to the top of Bobcat Pass) where Jeannine spent summers at the ranch home of her uncle and aunt Bill and Geneva Heck.

It was there that she met one of her dearest friends, Iva Belle (Smith) Mutz, who also lived at the ranch.

“We were about 8 years old when we got to be friends,” Mutz said. “We used to ride horseback. There was an old horse named Pat we used to ride double all the time. We rode him all over the hills up there. One time we got caught in a rainstorm and we found a lean-to. Of course since we worshipped Pat, the horse was put in the lean-to and we stayed out in the rain. Uncle Bill told us we were a couple of foolish little girls, ‘horses stay out in the rain all the time but you two will probably get pneumonia.’”

Though she was born in Raton, Jeannine’s parents lived in Van Houten, a coal mining community outside Raton. As a fifth grader, Jeannine went to live in a Raton boarding house, on her own, to attend school — perhaps contributing to her independent spirit.

She and Iva Belle roomed together as high school students in Raton, then at 16 Jeannine went off for 2 years to attend Stephens College, a private school for women in Columbia, Missouri.

“Nana always said ‘I paid $3,000 tuition for her to learn how to drink, smoke and play bridge,’” Neal’s daughter-in-law Kathy Neal said with a laugh. And bridge did, indeed, become a life-long passion for Jeannine who was known to have Friday to Sunday bridge marathons and who taught bridge for what was then a fledgling start-up resort and country club in Angel Fire.

“I was dating Richard Mutz when Jeannine came up to Eagle Nest to spend a couple of weeks with me. Richard wanted to go out but I said, ‘I can’t go, Jeannine just got here today.’ Richard said, ‘What if I got her a date?’ He went over and got Tal and we just all started going together. Two weeks later Laurelle came to stay and we had to do the same thing. We went over and got Bill Gallagher.”

In a 2002 Winter Enchantment article she said, “We lived in a little cabin behind the grocery store. Tal worked for his father doing whatever needed done — his mother Maude (Lowrey, daughter of Elizabeth Moore Lowrey – Elizabethtown’s namesake) died in childbirth when he was 8 years old. (Her sister, Annie Haddow, helped raise Tal.)

“I was taking care of myself, my husband and his father. I did not work. I guess I was indoors most of the time. We had loads of snow. We’d drive down into the Moreno Valley and the snow would be as high as the car on both sides. It was like driving through a tunnel, except with no top. I thought it was terrible! I couldn’t see how anybody could live in this much snow. Laurelle was going through the same thing I was. We would get together, play cards, visit, cook …. We ate together a lot.”

Around that time Iva Belle and Richard moved to Santa Fe (and, later, Moriarty), though she said, “We all kept in touch. Our kids all came along at pretty much the same time.”

Daughter Lynn was born in 1951, son Dirk, in 1954 and daughter Kymberly in 1965. When Lynn was 4 or 5 years old, Jeannine started teaching in Eagle Nest and then finished her bachelor’s degree, at Highlands University in Las Vegas. She taught for 7 years and substituted for 3.

Kym said she believed that was a turning point in her mother’s life “because that started her careers in teaching, business, banking and working for Angel Fire Corporation (now Resort). She went from being a mother and homemaker to a business woman.”

In the 2002 Winter Enchantment, Jeannine recalled the day she learned friends, Roy and LaVena LeBus hoped to build a year-round resort with a ski area, country club and golf course in the mid-1960s. “One night I went out there to play bridge and Big Roy had a bunch of blueprints on the table and I said, ‘Roy, what is this?’ And he said, ‘This is Angel Fire.’ I watched it grow from day one.”

The resort opened for skiing in winter 1966 and Jeannine worked as base lodge operator doing “everything from A to Z” before going to work for pal Bill Burgess in the marketing department and at the ski school. “I ran the ski school window for 2 or 3 years. There wasn’t anything I didn’t do then.”

Burgess agreed, noting, “I knew I wanted her to work with me.” Not long after she started Burgess said he almost lost Jeannine who threatened to quit. Asked what he could do, Jeannine replied, “Get me a raise so I will be making at least the same amount I’m paying my babysitter.’” (Jeannine earlier told The Chronicle she frequently had to tote baby daughter Kym to work. “She had her bed there because they paid me $1.35 an hour and my babysitter charged me $1.50 an hour!”)

Burgess said when he was out of town Jeannine took over for him, assigning classes in ski school, even though she herself did not ski.

“I took my one and only ski lesson from Ernie Blake at Taos Ski Valley,” Jeannine once said. “My friend LaVena LeBus broke her leg and I couldn’t get to her so I just sat there screaming for help.”

Her negative skiing experience never stopped Jeannine from making sure the ski business ran smoothly, Burgess said, adding the ski school and on-mountain staff loved her — with the exception of one summer lift operator. “Jeannine chided her about her decorum and dress so one day this young woman rapped on her office door and poured a bucket of cold water on her. Jeannine said something like, ‘You could use some of that water yourself.’”

Burgess said his friend and co-worker was very, very, very smart,” and related the time she decided mountain personnel were using secret radio codes. “She said, ‘When you tell me “I’m going to the Back Basin”, I’ll hear “The tools are on the way up.”’

“This turned out to be true. One time I sent her up there (it was about a 20-minute drive) and I heard ‘The purse is on the way up.’”

“There were always employees at her house. She’d take them under her wing, knowing they didn’t have two dimes to rub together. Other than that one employee, I didn’t know anyone who didn’t love her.”

After leaving Angel Fire Corporation (and working for both the LeBus family and AZL, which later bought the resort), Neal worked in a real estate office, then at Sunwest Bank (now Bank of America) where she rose to branch manager and vice president before leaving in 1988 to work at Winter Sports where she worked until moving to Arizona in 2003.

“I really got to know her better, adult to adult, when she was down here,” Lynn said of the move. “I grew to respect and admire the person, the ease with which she was able to come into a situation, to make herself and others feel comfortable. She chose to bloom where she was planted, she really did. Everyone has commented on what a bright, smiling person she was.”

Both Lynn and Kym said their mother was a fun, and funny, person. “She had a good sense of humor,” Kym said. “She loved to laugh. She was very enjoyable to be around.”

Burgess recalled a specific example of this sense of humor and mischief:  Seems when he and Jeannine were working at the Angel Fire Corporation office (a trailer), Jeannine would park in different directions just because she got a kick out of seeing how everyone who came in afterward copied her. “One day she parked her car parallel and asked me to T-bone it and of course they all followed suit! Some parallel parked around her, others pulled in beside me.”

Dirk shares his late parent’s love of the outdoors and was on a hunt at this writing but wife Kathy said, “Jeannine was an incredible mother-in-law.”

Long-time dear friend Laurelle Gallagher said, “We were friends since fifth grade and I will surely miss her.”

“She was a real people person,” Burgess said. “She enjoyed working with and dealing with the public. She always had a warm smile and twinkling eyes, by God she did.”

Jeannine is preceded in death by her mother Laura Heck MacDougall, who died in  2004 at age 104, and her husband Tal, who died in 1992. She is survived by her three children, Lynn Shields of Chandler, Arizona; Dirk Neal and wife Kathy of Red River; and Kym Perino and husband J.P. of Corning, New York; seven grandchildren: Christopher and Josh Shields, Dawson Neal, Holly Neal Sanchez and husband Shane Sanchez and Jasper, Jodylane and Jarrett Perino; and one great grandchild, Rozzlynn Marie Sanchez, daughter of Holly and Shane Sanchez of Red River.

“I’m just thankful that we got to have a 77th birthday party for her and she got to see her great-granddaughter Rozzlynn,” Lynn said.

Services for Jeannine are set for 2 p.m., Saturday, Oct. 13, at St. Mel’s Catholic Church in Eagle Nest. A celebration of her life will immediately follow at Laguna Vista Dance Hall.