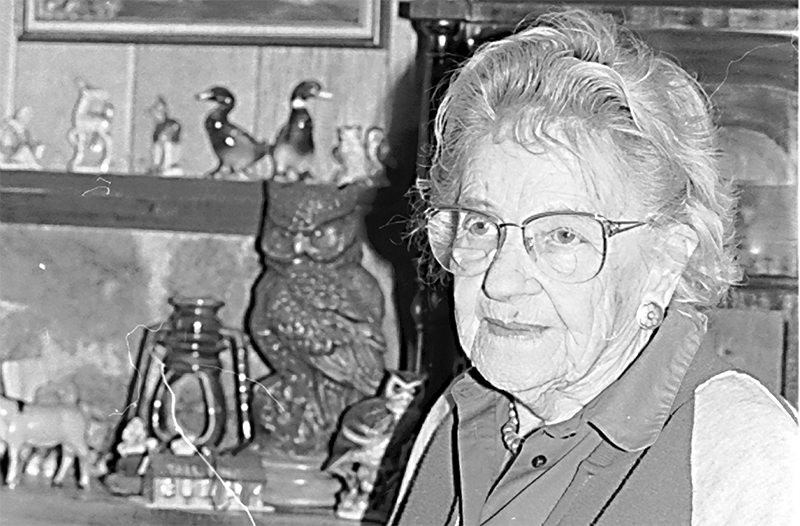 As a child, Winifred “Winnie” Oldham Hamilton could hardly wait to get to the mining town of Red River to visit her prospecting Uncles Read and George Oldham.

In her 1991 book, “Reflections from Red River to Raton,” she recalled she was 16 when she and sister Mabel “finally made the trip with her Uncle Rich in his Model T Ford” in 1917.

In August 1920 Winnie, her mother and dad, sisters Mabel and Florence and brother Nathan (Red) Oldham, made a return trip to Red River in a Dodge touring car. They spent two weeks camping on the Melson property, which the family later purchased, and became known as Tall Pine Camp. The “Uncles” lived there in an old log cabin and built other cabins which they rented to fishermen.

Winnie fulfilled a dream of making Red River her home in 1935 when she and husband Walter Hamilton moved there. They added more cabins and developed Tall Pine Resort.

For 63 years Red River was Winnie’s home. She and Walter were the host and hostess at their Tall Pine until his death in 1977, but Tall Pine was always a family affair, with sisters Mabel and Florence and brother Red pitching in along with Red’s children, Sharon and Walt.

Even after her beloved Walter’s death, Winnie kept on entertaining guests until a voice in a July 1990 vision told her to “sell, sell, sell.”

Three months later, with Oldham family agreement, she sold all but six acres, the main house and her log cabin museum.

She stayed on, though Mabel, Florence and “Red” all had died, and she was increasingly alone.

But after all, Red River was her home. She’d marveled at every mountain, climbed most of the high country trails, loved her birds and animals, and photographed and recorded almost every shred of history.

She was unforgettable. Though she had passed the role of Tall Pine Resort host to others, Winnie still had many Tall Pine visitors from the past, plus legions of friends, pass through her home to sign the pages of her guest books.

She was such a well-loved citizen, that a Town of Red River proclamation presented on the occasion of her 90th birthday celebration at Red River Inn proclaimed “Feb. 8, 1991 and every Feb. 8 to come as “Winifred Oldham Hamilton Day.”

In recent years Winnie had suffered from congestive heart failure. A pacemaker helped her keep going.

Early last week she was still driving, but a heart attack Thursday led Gigi Haynes, her caretaker, friend and hospice worker, to call Oldham family members and friends to Winnie’s side.

“We searched our souls, and we wanted her to die here in Red River,” said nephew Walt Oldham of Raton.

“I hospiced her through her dying (and so many people helped me),” said Gigi Haynes. “It was a great honor to be with her. She was a great friend.”

‘Way ahead of her time’

Haynes remarked that Winnie, born at the turn of the century, was “way ahead of her time.”

A rancher’s child and the first born, Winnie had been driving a car since age 13, said Haynes.

“By the time she was 20, she’d been to college for a year and already was teaching at the Sugarite mining camp, continuing her education in summers,” marveled Haynes, who spent the past two years as Winnie’s part-time caretaker.

Winnie’s teaching career spanned almost two decades at Sugarite, the Hoover Dam, the Moly Mine and some substitute teaching in Santa Fe.

‘The monarch of her family’

Longtime Red River friend Hank Mutz said she and Johnny first got to know Winnie and Walter “when we owned Aspen Park. If I had a problem, she answered it! I’d never done anything like that before. I was from the city and coming out here with no electricity and water was different.

“I was young, and she was there for us. She and Walter were friends of ours forever and ever.”

Summing up her thoughts, Hank said, “She was the monarch of the family.”

‘We loved Winnie to death’

“I knew the old uncles,” said Bob Prunty, who has lived in Red River since his birth in 1921.

And of course he came to know Winnie and Walter, “very congenial people,” after they moved to Red River.

“One time my brother and I were coming back from fishin’ at Goose Lake and met two ladies on horseback wearing scarves.

“I’m one of the girls up at Tall Pine Camp,” sang out one rider.

They later found out that that pretty girl at Tall Pine Camp was no other than Walter Hamilton’s wife!

“We loved her to death,” said Bob, a fellow Red River historian who had traded pictures with Winnie over the years.

‘She was a prankster!’

Asked for a memory of her longtime friend, Frances Williams of Red River said, “Honey, I have so many memories.”

But among her favorites is the evening Jess and Ed Lynchnik of The Lonesome Pine camp (where the Eisenhut now stands), had Frances and her first husband Dexter Walthall, John and Nell Wagner, and Walter Hamilton to dinner.

“It was in the winter, the snow was real deep, and I was in the kitchen helping Jess when somebody knocked. It was a floozy woman. She asked for the gentlemen to “help me” since her car was stuck.

After all the men left, Frances said she turned to Jess saying, “Why, that lady is stupid to be out alone.

“Jess started laughing…’You don’t know who that is?’”

Frances said soon everyone trooped back inside and Winnie took off her wig.

“Everybody knew it was Rosie, but me.” And that’s how Frances met Winnie’s alter ego.

Most guests never knew that Winnie was Rosie. But her prank backfired at least once. Gigi Haynes said Winnie told her of the time she was dressed up like Rosie and smooching on Walter. The next morning a female guest came to Winnie and delicately reported that “a woman in red has been making passes at your husband.”

Imagine Winnie trying to explain that one!

‘She preserved our history!

“You’ve read her books (“Wagon Days in Red River” and “Reflections from Raton to Red River.”) And she had slides all the way back to the ’40s.”

Among the most entertaining was a slide of the first-ever fish drop by an old biplane up at a high mountain lake. Irene says Winnie and Walter were watching the drop from horseback.

“When they dumped the fish, they missed the lake and hit them!”

Irene and her late husband Guy started visiting Tall Pine in the mid-’60s. The allure was “no phone, no radio, just peace and quiet and good fly fishing with Walter, one of the best I ever saw.”

Rogers was just a toddler when his parents started their Tall Pine visits.

When he was 12, Winnie offered to teach the preteen to drive. “He’s not old enough to drive,” said Irene.

“He can drive on my property,” Winnie insisted, and the two were off before Mama Lanon could say another word.

Irene laughs remembering how if a towel was dirty in their cabin, Rogers would hop in the car and drive up and back to exchange it.

One time Rogers said, “Mom, boy that Winnie can drive. She was behind me pushing me in that Scout!”

Winnie’s slide show was a treasure for anyone lucky enough to view it.

Lanon is thankful that Angel Fire resident Bob Bright videoed Winnie during one of her programs given in Angel Fire.

‘She was always up!’

Red River’s Johnny Brunson has memories of spending time with Winnie and Walter after he and Judy arrived in Red River in 1968 as newlyweds.

“Red River didn’t have that many people and we would get out and visit with the old-timers. Winnie’s house was almost nearly always open, especially in off-season.”

Brunson will remember Winnie most for her positive attitude.

“My favorite was how her father would not permit Winnie or her sisters to say the word ‘bull.’

“That just wasn’t appropriate for a rancher’s daughter. “He told his daughters they had to say “el toro” when referring to that male animal.

Could they ever dance!

Another native of Red River, John Brandenburg, remembers that during the Depression the community used to use the old schoolhouse for parties.

“Winnie and Walter were just enough older they knew all the dance steps.

Like the Oldham “Uncles,” John’s dad Jack was a miner, too, who worked at The Caribel.

‘She had a direct pipeline to God’

A friend of 22 years since she and husband Ken bought the Red River Inn, Alyce Densow said her friend and soulmate Winnie seemed to have “a direct pipeline to God.

Noting that Winnie was a Christian Scientist, Alyce said she is thankful “for all the time she did her prayer work for me and my family and got me out of trouble.”

Alyce also appreciated her friend’s many interests, “her sense of humor, her sense of history, her love for this area and everything in it.”

“She must have been a fantastic teacher,” Alyce marveled.

Tribute from a lifelong friend

Laura and Winnie danced together in Cimarron and at the Red River Ranch.

They both were young teachers in the coal mining camps — Winnnie at Sugarite and Laura at Van Houten.

Their friendship lasted a lifetime and nothing pleased Laura more than having daughter Jeannine drive her to Red River for a visit with Winnie.

Laura remembers Winnie “as a very outstanding person, a good citizen and very knowledgebable about the past of the county.”

A family friend and minister for the Church of Christ, Wally Clark, will officiate at the funeral service 2 p.m. Saturday, Jan. 24, at Errington Memorial Chapel, 1310 Second St., in Raton. Interment will follow at Fairmont Cemetery there.

A memorial service is planned Sunday afternoon, Feb. 8, at Red River Community House with the time to be announced.

From the Chronicle photo archives: