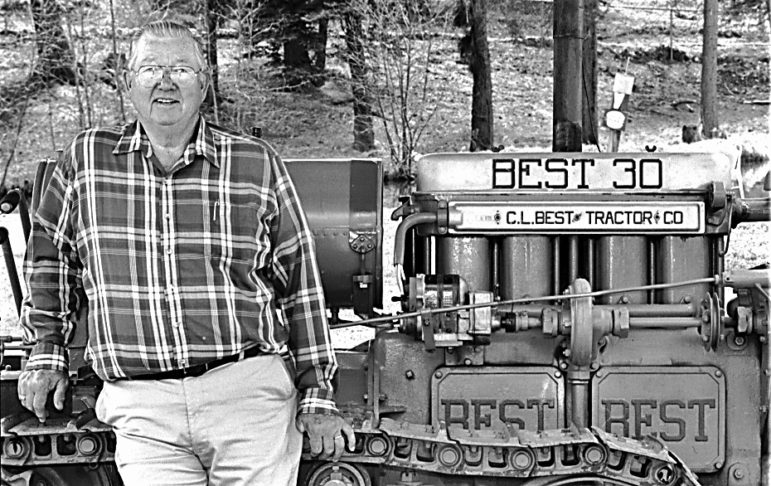 LWhen Lester Lewis’s father brought his family to Red River in 1936, just as now, you had to be resourceful if you were going to make a living here.

The Lewis family certainly was — and is.

L.S. Lewis moved to town along with his wife Jessie and their children Clifton, Evelyn and Lester, who was five.

According to Lester, his dad bought 110 acres from what is now the River Ranch at the west end of town to the Black Mountain Playhouse on Pioneer Road.

“He built seven small two-bedroom cabins at the Lewis Ranch (River Ranch)”, says Lester. “There was no running water. You got your water out of the river and used a cook stove and a coal lamp.

“He bought a sawmill and to power the sawmill, he bought a big steam engine from out of Dawson and then he and another fella drove that thing from Dawson all the way to Red River. It seemed to me like it took 10 days — something like that.

“When they got to the top of the pass, there was a whole bunch of people up there because they figured when my dad started down he’d run over the side of the hill. They had to back it down because on a steam engine that was the only way you could get compression. That thing had eight-foot wheels on the rear and I think the front wheels were like four foot.

“In the ’30s, when he built the Playhouse, it was a gambling casino, it was a 6,000-square-foot dance hall and it was a bar. Old John Dunn, he was the head gambler for the Black Mountain. He furnished and run all the games. He bought an old bar out of Cimarron that had bullet holes in it.

“It was wild and woolly back in those days, I tell ya. Dad was a deputy sheriff ’cause there wasn’t any law up here. I seen him handcuff guys to trees. They’d get into fights and cause all kinds of trouble and he’d handcuff them to trees and leave them there all night.

“I remember one time they had a shoot out right there on Main Street. A bunch of gambling operators from the Silver Spruce (Bull of the Woods) and Tony’s (Motherlode) all got in a big fight. They didn’t never hit anybody, but they hit several cars. Dad declared marshal law and shut the town down for the night.”

Another time the state police broke the door to the Playhouse down and confiscated all of the gambling equipment. Says Lewis, “John Dunn went to Santa Fe and I don’t know how he did it, but he made the state police bring it all back and fix the door.

When he was 14 years old, Lester said a gambler told he and some other kids to come back with $12.

“So we scrounged around and he said, ‘I’m going to show you a system how to play roulette.’ He spun it and every time he’d spin the wheel we’d win some chips. Then he’d got tired of playing and before we knew it, he had our $12.

“We thought we’d got onto something to make money!”

According to Lewis, his father ran the gambling operation for four years before shutting it down.

“He didn’t care for that. He put in a four-lane bowling alley and converted the dance hall into a skating rink.”

Lewis says he had many responsibilities as a youth helping with his father’s different ventures.

“Dad had 18 head of horses that he rented. My job was to gather up the horses and get them ready to rent. We had two or three milk cows and we had to milk the cows. At night we rented skates and set pins in the bowling alley. I set so many lines of pins I don’t care to bowl anymore!

“We used to cut ice off Tall Pines Lake and then we’d store it in an ice house to sell in the summertime for two cents a pound.

“Dad had this old Best tractor and when he first come here he used that tractor to help build a road up to the Caribel gold mill. A lot of it was a log road where they laid logs down and filled the cracks with dirt.” (The tractor can be seen in front of Lester’s son’s restuarant, Brett’s Homestead Steakhouse.)

“We worked hard. If it wasn’t for being able to poach a deer once in awhile we’d have probably starved to death!”

According to Lewis, the busy season lasted 40 to 45 days and only about eight families stayed here year ’round.

“That was a helluva buy,” he says.

After serving with the 188th Air Force National Guard during the Korean conflict, during which time he says he “never went overseas,” Lewis says he came back and met Janice Moore from Blackwell, Okla.

“Her folks’s home was blown away (by a tornado) at Blackwell so she was working at the Silver Spruce Lodge for the summer.”

They married “around 1955” and that winter Lewis says he went to work for Stokes Bolton building Red River Ski Area.

“We welded all the towers for the ski area,” he says. “I helped him build the Alpine Lodge and when he got the ski area opened, I managed the ski area about the second year it was open.

“Bolton sold to J.B. Veale and he came down and helped me build Powder Puff around 1961 or ’62. The first year we built whirlybirds (an innertube sled run). We had a train to haul people up the mountain. We had that for two or three years then we decided to build a ski area.

“Bolton was a good friend. He helped finance Powder Puff and he come down and did all the work for nothing… wouldn’t take a dime for it.”

Lewis says he bought the Big Chief gift shop from Bolton and ran that for six or seven years before building the Chief Burger. Since then he has built the Red River RV Park which he operates next to his son’s successful restaurant, Brett’s Homestead Steakhouse. Lewis says in all the years he has lived in Red River, he has seen his fortunes rise and fall.

“It takes a helluva lot of work to do anything around here.”