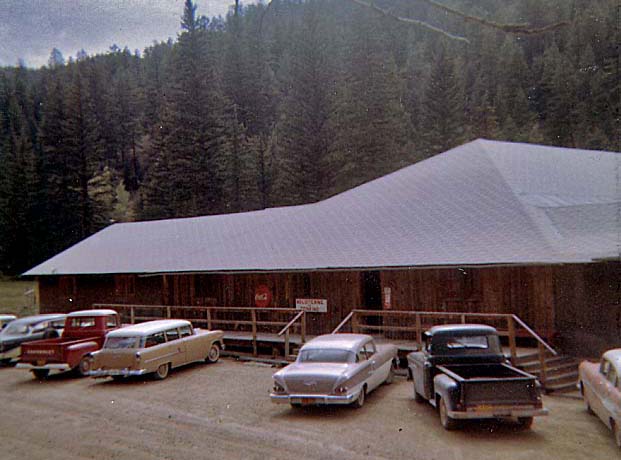 Summer nights, growing up in Red River, we Miller kids would traverse a deer-trodden mountain trail from our house to Pioneer Canyon to go rollerskating at the Black Mountain Playhouse. As a result I can still sing every word to “Beni and the Jets,” “Billie Don’t Be A Hero,” “In the Year 2525,” and other tunes we, and others, played over and over on the jukebox while we raced in circles on the polished wooden floor.

Turns out my dad rollerskated at the Playhouse as well when he was a teenager. He bowled, too — something we never got to do since the bowling lanes were long gone by the ’70s.

In fact, it wouldn’t be too great a stretch to say there isn’t a kid — resident or visitor — who hasn’t visited the Playhouse in Red River. Where else can a youngster go for hours of entertainment?

With the Red River Community House with its wholesome square dancing and movie nights, ol’ L.S. Lewis may have destined Red River as a family resort when he decided the gambling trade wasn’t for him.

In 1936, Lewis bought 110-acres — from the River Ranch at the west end of town to the Black Mountain Playhouse — for $5,000. He moved his family out and set to work building a lodge using lumber he milled himself from sawmill that was powered by a a steam engine he had driven all the way from Dawson — driving backward down the old Red River Pass!

Lewis cut all the lumber for the Lewis Ranch (River Ranch), Cliffside Cabins and the Black Mountain Playhouse — a 6,000-square-foot dance hall, gambling casino and bar. “I always thought that was kind of a marvelous, well-built old building,” said Lewis’ son Lester, who was 5 when they arrived from Wichita Falls, Texas.

According to Lester, the legendary John Dunn ran gambling at the Playhouse. A fugitive  when he moved to New Mexico (it’s said he accidentally killed his wife-abusing brother-in-law in a fist fight), Dunn established a successful transportation business and toll bridge in Taos, as well as gambling operations in Taos and Red River.

“Old John Dunn, he furnished and run all the games,” Lester said. “He bought an old bar out of Cimarron that had bullet holes in it — put there Billy the Kid and Black Jack Jack Ketchum.

“It was wild and woolly back in those days,” Lester said, recalling the time state police broke the door to the Playhouse down and confiscated all the gambling equipment. “John Dunn went to Santa Fe and, I don’t know how he did it, but he made the state police bring it all back and fix the door.

“Back in those days the gambling was pretty crooked. I was just a kid but you could go in any of the bars and if you had money, you played the slot machines.”

According to Lewis, his father offered gambling for 4 years before shutting it down. “He didn’t care for that. It was crooked and he didn’t like that.

“He put in a four-lane bowling alley and converted the dance hall into a skating rink. We used the old skates that you had to tighten onto your shoe with a strap that went around the ankle.”

Lewis said he had many responsibilities as a youth helping with his father’s different ventures.

“Dad had 18 head of horses that he rented. My job was to gather up the horses and get them ready to rent. We had two or three milk cows and we had to milk the cows. At night we rented skates and set pins in the bowling alley. I set so many lines of pins I don’t care to bowl anymore!”

Lester wasn’t alone with his duties, however. Dad built three cabins there for the help. “All the pin boys, they stayed in those cabins.”

Lester said the busy season lasted 40 to 45 days and only about eight families stayed here year ’round. “We used to cut ice off Tall Pines Lake and then we’d store it in an ice house to sell in the summertime for two cents a pound.

Two owners later, Bud and Betty Fisher are the Playhouse’s owners — 40 years after they bought it from Peewee and Billie Martin (Billie had inherited it from her parents, the first owners after L.S. Lewis).

Betty said. “We started working summers for Billie and Peewee in 1958. Our first summer we were out here we stayed in one of those cabins Lewis had built. We shared the bathroom in the Playhouse with all the pin boys.

“The cabins weren’t very big, probably 12 foot wide by 20 at the most with two rooms,” Bud said. Small, especially, with the Fishers and their two children, Randy and Sandra, sharing that one cabin (Barry, their youngest, was born in New Mexico July 5, 1963).

“The pin boys’ cabin was smaller. They had double deck bunk beds and 8 or 9 boys in 2 rooms. My job was to cook for all the employees.”

Bud supervised the pool hall and skating rink, keeping an eye on the pool boy and skate boy — one racked up balls, the other affixed skates to shoes … again and again. “Those clamp-on skates were always coming off.”

The Fishers arrived in Red River the summer before Red River Ski Area was built, a time when Red River was quiet and the land around the Playhouse was forest and meadow.

“There was no law enforcement excepting out of Taos … if the sheriff wanted to come,” Bud said — a daunting prospect since fights were not uncommon.

“The day we got there a fight broke out,” Betty added.

“People were drinking out front and they came into the Playhouse drunk,” Bud continued. “It was scary because you had to do it yourself. Billie had skates to conk ’em over the head and sometimes she had a gun wrapped in her skirt.”

The Playhouse has always been a work in progress — Billie Martin’s parents, the Maddens, added on the pool hall, dance hall, miniature golf course and Rainbow Lake, a guaranteed catch commercial fishing pond (now the Free Children’s Fishing Pond in town) — and under the Fishers’ ownership, it has undergone several changes.

“We couldn’t afford to hire an electrician, plumber or carpenter and since I taught industrial arts, we did some remodeling.… Many of the fights happened back in the dance room so we did away with that room and made our apartment  there.

“The first thing we did was put in a bathroom and kitchen,” Betty said recalling the days when she rinsed diapers out in the Playhouse toilet.

Bud taught industrial arts and coached in Kansas so from the time they bought the Playhouse in 1962, they spent every summer vacation in Red River.

In the early ’60s, with the addition of skiing to Red River, the Fishers had the Playhouse winterized and began leasing it out for the winter until Bud “retired” from teaching in 1981 and they moved up full time.

“The day school got out, we left to come to Red River,” Betty said. “We opened Memorial Day and left just after Labor Day. We had a lot of fun. We took all the pin boys on a picnic every Sunday.”

Many of the pin boys lived in Questa but they lived at the Playhouse most of the week. “They’d go home Friday night and be back Saturday morning. We were open 10 to 10, though some days they didn’t even have to work if no one bowled.”

The pin boys could be a bit unpredictable, though — pin boys would quit and Betty said, “We’d have to run to Questa to find some new. About 3/4 of Questa worked there, seems like.”

There was always a need for pin boys, though. Betty said all of their children worked and one nephew kept coming to visit “ ’cause he’d end up setting pins.”

Betty said she ended up playing “house mother” to the pin boys, recalling mishaps like the time one “was playing with a lure while he was setting pins and got it caught in his scalp.”

One pin boy had to be fired, Betty said, “because he got mad at a customer for complaining so he stuck his chewing gum in the ball holes.”

With fewer kids willing to work as pin boys, Bud said, bowling was discontinued in 1976. They also tried a number of uses for that space — Pojo, a kind of miniature golf on pool tables, a pizza parlor, radio controlled car races….

“That was one we never should have tried,” Betty said. “You forget a lot of things that didn’t work.”

Outside, the miniature golf course always had a simple design — clay from Red River/Questa Canyon was used for the fairways. “We had to water it down and roll it with a 50-pound hand roller,” Betty said. “After a rainy day, you had to scoop the water out and roll it down again.”

The Fishers also continued to have dances 4 nights a week in the skating rink. “That worked fine until the ’70s when drugs started getting so bad,” Bud said.

Until then, bands like TZ Wright and a popular Taos band played to enthusiastic crowds

“Through the ’60s, it was great ’cause they’d come dancing in the door and they wouldn’t even leave at intermission ’cause they didn’t want to lose their place.”

The dance still attracted a rowdier element, Bud said so they hired Johnny Brunson to work as a bouncer. “He said the worst fight he ever had to break up was two little girls. They had their hands yanking on each other’s hair and he had to drag them out.”

Gradually, the dances just got to be too much effort, Bud said, and they were discontinued, too.

But the Playhouse continues to take  care of the latest
generation to go through its doors … and skate to the music.