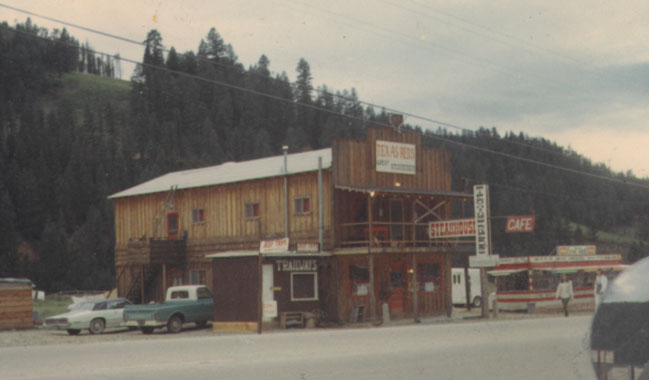 The following article by Jo Bynum was written for the Sangre de Cristo Chronicle’s 2002 Summer Enchantment visitor guide. Texas Reds had customers from all over the world over until it was destroyed in an early morning blaze Nov. 3, 2004. Several years later the Gill’s sold the Texas Reds name to Steve Heglund, who operates the restaurant with wife Priscilla at the Lodge at Red River. William Stark “Bill” Gill, 88, died Dec. 26, 2018. Janetta Gill Gorsich died in 2010. Her son Will died in 2004. The Texas Reds in San Marcos has closed.

Meat sizzling on a hot grill, people cavorting with friends, Old West memorabilia, juicy steaks done to perfection and the crunch of peanut shells underfoot. What comes to mind? For people familiar with Red River, Texas Reds (TRs to the locals).

A Red River landmark for the past 35 years, Texas Reds might never have gotten its legs had it not been for a lull in the Texas oil business.

During the spring of 1967, frustrated oil lease broker Bill Gill left wife Annette teaching school in San Angelo, Texas, to work his grubstake in Red River. He spent the summer operating a pinball/pool arcade but decided the restaurant business might be a better claim.

“I decided that since I enjoyed cooking at home, I could do it for the public,” Gill recalled during a 1987 interview with The Chronicle.

By Thanksgiving, Bill and his brother, the late John Gill, had remodeled John’s former Jeep Trailways building into a restaurant. Along with the building, John gave the business its persona — the name Texas Reds. “John started playing the ‘outlaw’ named Texas Red in the Frye’s Old Town shoot-out (across the street) in the 1950s,” said Bill.

Thanksgiving 1967 Texas Reds Place debuted with one menu item — the “Great Steakburger,” complete with french fries and all the trimmings for only a dollar.

After taking a couple of months to figure out they would need a large volume of burger eaters to make much profit, in February 1968 a 15-ounce rib steak was added to the menu priced at $2.95. Bill doubled his gross by the end of the second year. Texas Reds Place became established and could afford a sign, renaming the Gill’s grubstake to Texas Reds Steakhouse. Business has been booming ever since.

“When we started, our residence was on the first floor and the restaurant on the second,” Bill said.

By 1973 the 40-seat steakhouse was “bursting at the seams.” The Gills moved to a house behind the restaurant and opened the saloon downstairs where diners could enjoy libations while awaiting their meals.

In 1975, seating was increased to 90 in the steakhouse and 60 in the saloon. Twenty-five more seats were added in 1987 and another 26 in 1990. The Gills found another residence and the house behind the restaurant became their office complex.

Although there is frequently confusion about the restaurant’s name — “We’ve been called ‘Big Reds,’ ‘Red Tex,’ and ‘Bill’s Grill,’” — Bill has learned over the years that Texas Reds is most remembered for its Old West atmosphere, the fun of throwing peanut shells on the dining room floors and its two most popular menu items — the Rib Eye and New York steaks.

The first couple of years, Bill spent a lot of time ridin’ the trail between Red River and his family in San Angelo, waiting for his children to finish high school. It didn’t take long for Annette and the children to join him in the family business.

Bill and Annette are still involved in the day-to-day operations of the restaurant. Bill admits they don’t let him in the kitchen much anymore., but says Annette can be found at the cash register at least five nights a week and still spends most of her days “straightening and reorganizing” the memorabilia scattered through the restaurant.

“I’ll probably be here forever,” says Bill, “but the kids do most of the day-to-day work.”

Although son Ralph now lives in Fort Worth, he spent several years at the restaurant, managing the saloon for much of that time. Daughter Nancigail Gill Miller waited tables and husband, Troy Miller, tended bar until they moved to San Marcus around 1990 to open a second Texas Reds. “It’s licensed by me, but it’s their own baby,” says Bill.

Daughter Janetta Gill Gorsich waited tables, but can now be found in TRs office. She also acts as receptionist for the restaurant and operates her own real estate business. Her husband Steve Gorsich is the current saloon manager. After gaining experience at a Texas Steak and Ale, son Rick is the current kitchen manager at TRs.

And the next generation is starting to grab picks and shovels — or maybe its plates and peanuts. The Gills’ eight grandchildren are coming of age and making excellent employees, according to Bill, during school vacations.

The Red River grandchildren, Will and Jamie Gorsich, work part-time for Bill, although Will spends more time at Bill’s Red Eagle Golf Course during the summer. The four grandsons living out of town — John and Rhett Gill in Dallas and Connor and Riley Gill in Fort Worth — come up periodically, “when they can,” and Bill puts them to work. The San Marcus granddaughters Darsey and Madison Miller spend more time at the San Marcus TRs.

Texas Reds is also a community stake. In a resort setting where many local residents work two or more jobs to survive, Texas Reds frequently fills the bill as one of those jobs.

“I have employed up to 10 percent of the population either part-time or full-time,” Bill said during his 1987 Chronicle interview.

At one time it was an accepted fact that Red River locals would work at TRs sometime during their lives. But Bill says things have changed over the past 10 years. “There are so many other businesses and family businesses in Red River now that not all of the kids work at Texas Reds like they used to. We’ve been blessed with good help over the years. We must be doing something right.”

Looking back, Bill can easily remember one big night — New Year’s Eve 1984, “when we opened at 4 p.m. and were still serving meals when they were singing ‘Auld Lang Syne!’

“We turned over about five times that night and served over 400,” he recalls.

After all the expansions, it is not unusual for TRs to serve over 500. On an average night seatings turn over about twice and on a “real good night” three times, Bill explained.

TR’s low point was an ill-timed expansion into Angel Fire in 1975 … “just a few years too soon,” believes Bill. Texas Reds at Angel Fire was supposed to open Thanksgiving, but finally opened its doors in February during a bad ski year. After three or four months Bill called it quits.

Serving breakfast was another minor bust for Bill. “We stayed open two days for breakfast in the summer of 1978. Only a few came … and we decided we didn’t want to get up that early in the morning after closing so late at night!”

Bill believes the key to his success has been his “stick-to-itiveness.” TR’s keeps trying to have good food, good service and good atmosphere. The popular items stay, including the peanuts they have had since opening.

“We’ve gone through I don’t know how many tons of peanuts.” And although the diversification of tastes over the years has prompted Bill to add more entrees to his menu, including chicken, fish, lobster tails and pork tenderloin, he lets it be known that TRs “still specializes in great steaks.”

“It’s been kind of a high point being here for 35 years,” Bill observes. “Most of the kids working for Texas Reds now weren’t even born when I opened. It’s gone by pretty fast and every year gets a little faster.”

That Thanksgiving, Texas Reds Place debuted with one menu item — the “Great Steakburger,” with French fries and trimmings, for $1. In February 1968, a $2.95 15-ounce rib steak was added to the menu and by the following year, the newly renamed Texas Reds Steakhouse was booming.

Along with the building, John Gill — a Western actor and stunt man who reportedly found Red River when his car broke down en route to a rodeo in Wyoming — gave the business its persona. John Gill had played the ‘outlaw’ Texas Red for Frye’s Old Town shoot-outs in the 1950s.

John’s namesake soon became an indelible part of Red River’s history.… So it was that locals — and people from all over the United States — mourned with the Gill family at the loss of this “Red River institution.”

Fort Worth’s Laura Rutledge, whose family of six is one of many generations of Freese/Rutledge summer home owners in Red River to visit Texas Reds said when she heard the news, “That can’t be. It’s our tradition. The kids had to climb Wheeler Peak in order to get a steak at Texas Reds.”

Texas Reds also became a popular spot for more than a few wedding receptions, beginning with that of Bill and Annette’s daughter, Nancigail and Troy Miller in 1978.

“Our wedding reception was there,” said Jake Pierce, recalling he and Katie’s wedding day. “Almost everybody in town has had some tie to Texas Reds. I just think it’s a piece of Red River’s history that’s gone.”

Asked what was lost in the blaze, Annette answered, “Which room do you want me to start in?”

Annette and Nancigail noted the loss of the unique fringed light fixtures they’d bought from “Shadey Lady Lamps” in Albuquerque.

Everyone in the family lamented the loss of Bill Gill’s treasured family photos that hung behind the cash register — parents, grandparents, great-grandparents. “He had the cutest picture of his mother when she was 16,” Annette said.

Plus, as Nancigail noted, there were, “all the pictures in the bar. Texas Reds is like a museum for Red River.”

The wooden Little Red Schoolhouse crafted by former Red River resident Lou Kardis, posters from John Gill’s movie career (he appeared in “The Alamo” with John Wayne), a poster from a play Ralph wrote, animal horns, antique barbed-wire collections.… The “Little Red Schoolhouse” quilt made by Beth (Calhoun) Baker, Marsha Kidd and members of Friends of the Red Rivr Library, which Bill Gill bought back from a raffle winner from Texas “so I could keep it in Red River.”

Janetta Gill Gorsich said she misses all that, too, but what hurts the most is the loss of a bear hide killed by her son Will who died last April.

The Gills say they’ll likely rebuild and when they do, likely stick to the formula that has worked best these past 37 years: good food, good service and good atmosphere — peanuts on the floor … all that.

Janetta said, “We’ll do it again but it’s not going to be exactly the same. I have so many memories there.

“I had a ketchup fight one time with Stewart Herd. “We could not get the ketchup off the wall. We always said, ‘It’s just part of the building now.’”

Janetta said they went into the building and salvaged a few things — a calendar that doubled as sort of a weekly journal for the staff, waitresses’ tip cups, “sentimental stuff.”