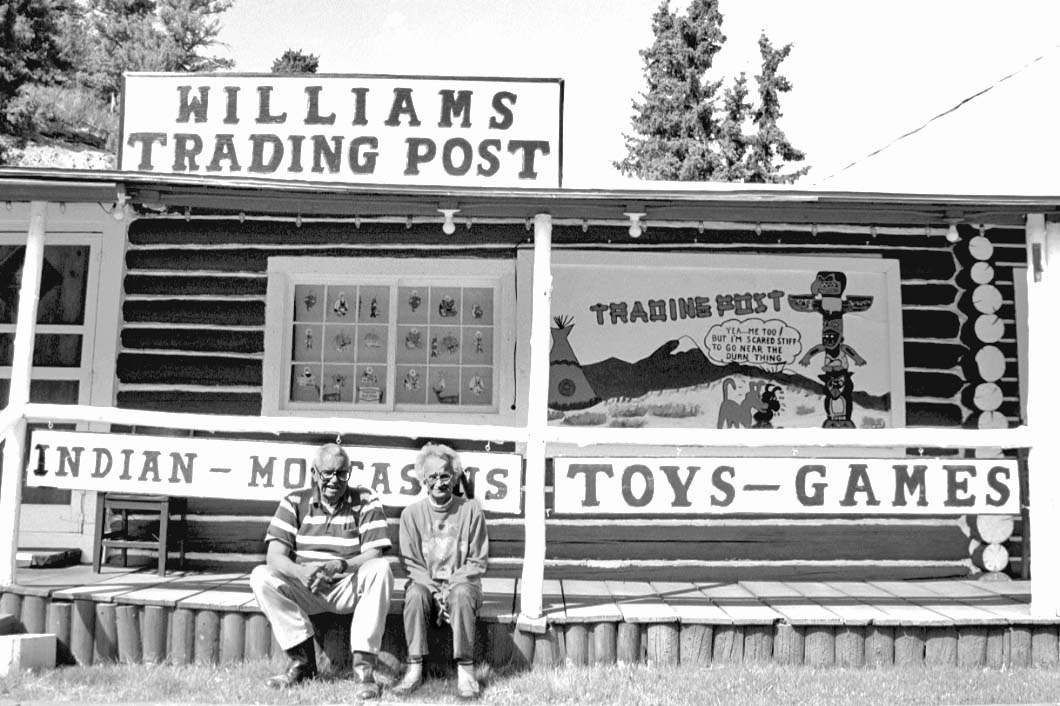 Don and Frances still keep their store open every day in the summer. (Photo by Ellen Miller-Goins)

Don and Frances Williams have dinner guests, but then they do every day, so I pull into the driveway anyway. The four deer nibbling on birdseed outside the Williams’ home barely pause as I get out of my car and walk inside.

Just like Williams’ Trading Post, Frances and Don’s store in front of their home, the deer have become a regular tourist attraction.

“You can’t believe the pictures that have been made of those deer this winter,” Frances says. “And movies…. Every once in awhile, somebody’ll say, ‘This is the highlight of my trip, being able to see deer this close.’”

Don says it all started by accident:  “I started feeding the birds, then the deer started coming down. Everyone always asks me how long ago that was and I tell them I don’t know.”

He does know he spends about $60 a week on birdseed which is shared by birds, tassel-eared squirrels… and the deer.

A few bucks visit so often, they have been christened Fred, George, Don (“Francie named him that”), Pete and Repete (“two little fork-horn bucks”).

“Every year, just before they get ready to shed their antlers, I tell them, leave ’em here!” Don says. He shows a small forked antler he’s had mounted and lacquered.

“This is Don’s right antler,” Don says. “Fred and George are the two biggest ones.”

Beneath that slightly cantankerous exterior, Don’s a regular softy.

Even before they discovered the deer were a natural attraction, the Williams had a flair for public relations — a tradition Frances started when she moved to Red River in 1955 with her first husband, the late Dexter Walthall. The couple operated Dexter’s Trading Post and Dexter’s Jeep Tours, one of the first in town.

“We used to travel in the wintertime and talk Red River up on TV and radio stations,” Frances says. “We invited ’em to Red River. I’d put ’em up in my house.”

Frances and Dexter made three totem poles, one of which still stands in front of the store (the other two were stolen) and Frances painted a popular postcard cartoon image of two dogs talking about a totem pole (“Beats me. I’m too scared to go near the durn thing.”)

“This gentleman came in with a little boy about 5 and he said, ‘Mrs. Williams, can I get a picture of you with my son? Stand right there by that sign’ and he said he had one his parents had taken when he was the same age!”

Dexter died in 1964. With the help of her good friend Evelyn Clarke, Frances continued to operate Dexter’s Trading Post. In 1968, she married one of her sporting goods sales representatives, Don.

“He made fun of me because I didn’t know how to buy sporting goods, so I married him to get even!” Frances quips.

Don continued working as a sales rep until 1972. They added onto the store and it’s been Williams Trading Post ever since — Don selling sporting goods on one side, Frances selling gifts, books and jewelry on the other.

From Memorial Day to Labor Day every year the Williams work most every day:  “I take Monday off to go grocery shopping in Taos,” Don says.

“We’ve just always lived here,” Frances says. “It always felt like it was home. We don’t consider it a business, it’s our home.”

“That’s why we close in September,” Don says.

Usually to go fishing at favorite spots like Eagle Nest Lake or Shuree Ponds in the Valle Vidal.

They keep a few but Frances says, “We’re big catch and release people. The ones I object to are what I call the fish hogs. They go out there, catch their limit, fill their freezer, then go out and catch some more.”

In summer there are a few days where it’s slow and the Williams can visit with one of their longtime customers and friends or practice casting from one end of the store to the other.

On busy days, though, it’s a “madhouse,” Don says. “There’ll be three or four of us behind the counter trying to take care of everybody. It’ll get so crowded you can’t move!”

Lucky for the Williams, they have help from a crew of longtime friends-turned employees, including Clarke.

“She retired you know,” Don says. “She quit for 1 year and she couldn’t stand it so she came back.”

Overstock and other hazards

All businesses have their setbacks and the Williams are not immune, though theirs are a little… unique.

There was the time Frances had way too many Mexican sombreros. Rusty Russell, the well-known Southern Methodist University football coach, put one on and walked up and down the river.

“He sold me out of hats” Frances says.

Both Don and Frances have managed to get hooked in the store and Frances recalls a memorable time when she got a “big ol’ treble hook” in her thumb. She asked the football coach to pull it out.

“He said, ‘just a minute,’ and went and got a fifth of bourbon. He drank half and poured the rest on my thumb!”

They keep coming back

Polaroid snapshots line the counter at Williams, each with a proud angler holding a big trout, winners of Williams’ weekly fishing contest. People who catch a 15-inch or larger trout get a snapshot, weekly winners get a small trophy, and the winner of the biggest fish of summer gets a big trophy.

Don started the contest 7 or 8 years ago, but the photographs were a tradition started a few years back.

“Many, many years ago we started the Red River Travel Association,” Frances says. “I had a black and white Polaroid. I took pictures in here and sent them to their hometown newspapers. That’s what started it.”

When Frances and Dexter first moved to Red River she says, “There were so few of us. Everybody had to swing a chore of some kind. Back before we had a chamber, we took turns writing letters and taking care of chamber-type duties.

“At one time, we had two chambers. One faction didn’t like the other. Finally, everybody got together and changed their attitude of what a chamber should be.”

She loves Red River and is busy writing her memories of her life and other Red River old timers.

“I enjoyed the ones who lived here,” Frances says, adding back then in winter, “There was only about 15 of us. We played a lot of cards. Ate our meals together. When somebody had work to do, we all pitched in. That was Red River.”