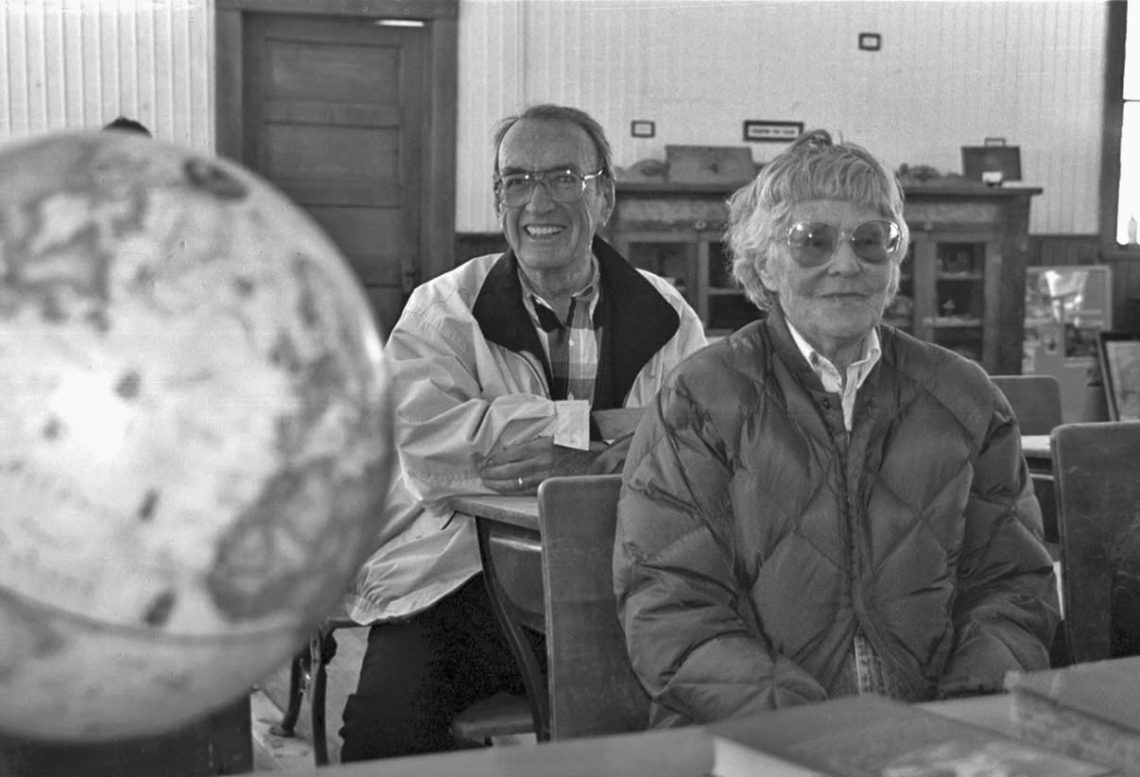 At 6 a.m. each morning in the 1930s, Johnny Brandenburg began stoking the wood burning furnace at the schoolhouse — a job for which he earned $5 a month. At 8 a.m., Opal Gallagher (Gwinn) would ring the school bell (“She was a teacher’s pet,” Johnny chides) and the 25 or so students, grades first through eighth, would file in, taking their overshoes off in the hall.

“If the day was extremely cold, we’d gather around the heaters,” Opal says.

The school was lit by lanterns and had no indoor plumbing or running water. Students took turns hauling water from the river to the school until the day Johnny chanced upon a miner who gave him a gold nugget.

“You know what, I never had to carry any more water!” he says.

The basement was used as a teacher’s apartment. There was a hitchin’ rack on the east side of the school for horses.

Opal lived off the Old Red River Pass where the McShan Ranch is now and rode to school daily by horseback — a habit the horses found hard to break.

“In summertime, when we’d ride into town, the horses would want to go to the school.”

She says her teacher Mrs. Wilton used to mark her down for tardiness until Opal invited her home one weekend. The ride up the old Road Canyon was extremely steep and Opal’s teacher said, “I don’t know why you even come to school!”

Opal wore jeans for the ride, but says she kept a dress hanging at the school “’cause you couldn’t wear Levi’s to school.”

She changed in the closet every day, but usually by winter the weather made getting to school impossible.

When she graduated, Opal says the teacher let her stay in exchange for some help. She tutored Toni Simion, Jr., but says, “That Toni Jr. was something else. He completely ignored me.”

During restoration, a bunch of flash cards were found stuffed in a wall. Opal is sure it was Toni.

Every school day began with the pledge of allegiance and the school’s curriculum included “reading, writing, arithmetic, history, geography, art and music.”

Mrs. Wilton was into Native American lore and art and Johnny says he had kept a drum he made a long time. “We used to have Indian dances,” Opal says. “I was Chief Rain in the Face.”

Students brought their own lunches to school — usually in lard pails — and placed these in the entry hall.

With a twinkle in his eye Johnny tells how for a time, desserts were disappearing.

He and his partner in crime, Toni Jr., solved the mystery by planting chocolate bunnies stuffed with Ex-Lax in their lunch bags. The culprit, whom Johnny declined to name, bolted from the room at about 3 p.m. that afternoon!

During the school years, and for many years afterward, the schoolhouse served as a community center for the town, housing everything from weddings to funerals to elections.

The bell in the belfry served as the town alarm during a time when there were only two telephones in Red River. “The bell was tolled for emergencies,” Johnny says — a house on fire, a forest fire, a child in the river… ”

The schoolhouse was also a center for social gatherings like the traditional Halloween and Christmas parties, and dances.

“Toni Jr. and I would pump that player piano (now housed in the schoolhouse museum),” Johnny says, adding if the song was meant to be a slow dance, “We’d pump it fast, just to tease ’em.” And, of course, during fast songs, “We’d pump it slow.”

The floor was also warped but dancers did fine as long as they       followed the grain!

After the school closed, the Red River Women’s Club maintained the building and continued to use it for town functions, including the annual Christmas and Halloween events and birthday parties.

“I still remember Ada Romer’s hot rolls,” Historical Society vice president Frances Williams says. “Some of us who were supposed to be working would hide some so we’d be sure to get some!”

With the exception of its exterior (it was white) the Little Red Schoolhouse in Red River has been restored to look much the way it did when Johnny and Opal attended.

Built around 1917, the school closed in the early ’40s. A dispute with the Questa Independent School District over ownership ended in the ’70s when a judge ruled in favor of the district. After years of negotiations, the town purchased the historic building for $36,000 and moved it to its present location on Jayhawk Trail last year.

Since that time, members of the Historical Society and town   officials have spearheaded a fund-raising drive to renovate the school. Funds have been used to paint the building, build a new porch, stairs and wheelchair-accessible ramp, refinish the floors, re-roof, add heating, and install a new security system.

The museum interior houses school desks, old photos and lots of artifacts from Red River’s past.

The mining equipment at Brandenburg Park will also be placed outside the new museum and Brunson says a “real miner’s cabin” is also in the works.

Many museum documents are also housed in a new addition to the rear of the Red River Library adjacent to the Little Red Schoolhouse.

Says Williams, “Getting the Little Red Schoolhouse back… it means a lot to the descendants of the old timers.”