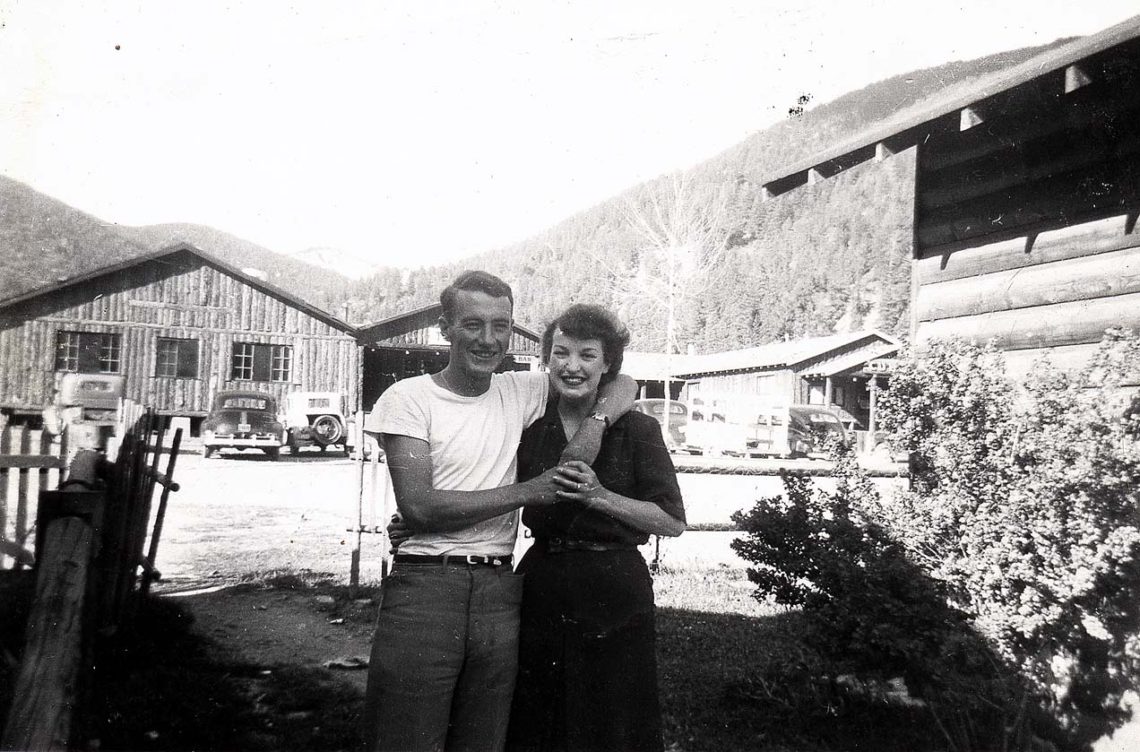 Johnny and Rosie the summer they met.

Johnny Brandenburg has spent nearly all his 81 years in Red River though he admits there were a few winters his mother Lottie packed up Johnny and sister Aileen and headed to Raton so they could attend school while father Jack stayed in Red River to work at Caribel Mill up Pioneer Canyon.

“It was an arduous journey to get from there to here but weather permitting, we’d come out,” Johnny says. “We were here every time we got a chance. My folks had a home at the end of high street.

“One year I brought a kid out from Raton. I thought we would play in the snow, get the wagon out and sled, but I couldn’t get him out of the house. He wouldn’t get away from the stove. He was freezing!”

Johnny, on the other hand, was used to Red River winters. He says he’d bundle up in “blue jeans, ‘long handles’ and wool socks. Boots were better looking but overboots were warmer. You could put a pair of felt slippers in them. And I wore a scarf and a stocking cap. I had a stocking cap my mother knitted for me. It was shaped like a pickle.”

His winter garb was a far cry from the water proof, warm garb we’re used to today, but Johnny says he doesn’t recall getting cold and wet.  “I guess it was cold enough it wasn’t a problem, not as long as you had wool socks on.”

Appropriately attired, Johnny and best friend Tony Simion, Jr., never let winter slow them down, flying down what is now The Face at Red River Ski Area on whatever was available. “There was an open area and we’d take an old scoop shovel, put it between our legs and ride down to pack it out then Tony Junior and I rode our sleds off The Face.”

Other times they’d wait for local miner Lymon Pratt to leave his house “and when he left in his truck from his house we’d grab onto the back of his truck in a belly flop and he’d pull us to the top of the Old Pass. We could ride from the top to the bottom without stopping. It was a terrific ride.

“We had a big ol’ bobsled and we’d also pull that behind a car if we ran out of things to do.”

Though Red River Ski Area was not built until 1959, Johnny says, “When I was 16, I got my first pair of skis. They were hickory Northland skis with bear trap bindings. We’d go over to Italian Park on the east side of the Old Pass and try to learn to ski. I ended up with a tree in my crotch. I stopped just in time.

“That was the trick — to be able to keep on your feet. We didn’t use poles. We didn’t know that you were supposed to have them.

“Eventually, I could turn.”

His commercially made skis were not Johnny’s only experience with skiing. “I saw some skis that a guy had made at the Edison Mine up in the Midnight area. This guy decided that he’d make his own skis. He had one that was real wide and one that was real narrow. We didn’t know the difference so we tried them.”

By 7th grade Johnny was attending the white Red River School on High Street (now the Little Red Schoolhouse Museum on Jayhawk Trail) where he earned $5 a month for arriving at the school each day at 6 a.m. to get the fire going and stoke the woodburning furnace.

“I rode my horse in the fall and spring and in the winter I walked.

Later, he and Tony Junior attended high school at the Moreno Valley Consolidated School (which burned to the ground in 1952). In an earlier Sangre de Cristo Chronicle interview, Johnny said, “Tony Junior and I lived with the Mutzes in the bunkhouse at the ranch during the school term. The cabin we lived in had cracks in the walls so we kept a tarpaulin on our bed to keep the snow off our bedding.

“Emil and Maggie Mutz had the contract to take kids from E-Town to the Moreno Valley School. I was a junior in high school and I drove the ‘bus’ … an International pickup. All the boys wanted to ride on my bus ’cause they were all smoking. All the girls rode John Haddow’s.

“One year a blizzard was coming in so the school principal dismissed school at 2 o’clock. We got home at 6 o’clock and it was only 6 miles. All other traffic was stopped but we kept going. When we hit those drifts, I’d back up and all the boys would get out and I’d gun it to make new tracks. They would all get behind the bus and push it.”

In Red River, too, Johnny says, “There was no road maintenance in those days. Everybody had a snow shovel and knew how to use it. If somebody had to go the hospital in Raton, all the men would get together and clear the Old Pass by hand.

“During the Christmas holidays volunteers would go out and shovel the road to the Tall Pine Lake for ice cutting. I was usually one of the volunteers — my dad would volunteer me.

“We’d cut the ice, then with the tongs you’d push it down and then pull it up and the rush of water would help push the ice up. A kid could lift a 300 pound block of ice.”

Ice cutting took at least a week and it caused some hazardous conditions. “We had to keep the lake shoveled to avoid falling in the holes they made. An experienced eye could tell where to go.”

Johnny recalled a time when a fellow with a less experienced eye made his way onto the lake. “Somebody hired Lester Bowers to help cut ice and he walked out there where it had snowed and covered the hole where it had refrozen to about an inch thick. He went down to the bottom but just like a cork, he popped right back up. We got him downtown to change his clothes. We didn’t think about it being dangerous, it was just a big joke.”

The 10-day holiday ice cutting was how Red River locals got enough ice to last through the summer.

‘We’d bring the ice down and put it in the ice house. Its walls were double thick and filled with sawdust and the floors were sawdust. You’d pack the ice in there and when you were through, your ice house would look like one big ice cube.”

In spring 1940, Johnny finished high school in Raton. Then after returning from a prisoner of war camp in Germany, on Dec. 2, 1945, he married Rosie Frambers of Raton — they met in Red River in 1941 when she came to work one summer at the Monte Vista Lodge.

Says Rosie, “We had our little home there between Main Street and High Street (near Red Dawg). We moved in in the spring and J.D, was born in the spring of 1948. (Their other children are Kathy, Cokie and Pam.)”

“Us young married people went to Raton to have babies. Probably the last 2 months before your baby was due the doctors would kind of insist we come down closer. I think it depended on what time of year your baby was due. Mine always seemed to be in wintertime — December, February and March.”

Life in Red River was mostly ideal, Johnny says, though the biggest concern they all shared was “the lack of medical attention.”

Says Rosie, “J.D. cut his lip one summer or fall and we had to drive to Raton to get stitches and of course, all our kids went through the childhood diseases. J.D. got the measles that went into pneumonia.

“A local lodge owner who was also a nurse had penicillin. that took care of the problem.”

And most their problems were minor, Rosie says. “We were happy.”

Johnny says about 30 families lived in Red River year-’round at that time — including Johnny’s parents, the Mutzes, Simions and Youngs — though Rosie guesses “that’s a high estimate. It was not lonely because we were a close-knit group. We’d cook up beans and spaghetti or something and everybody’d play cards for the evening.

“In the fall, the boys used to get together. There used to be a lot of what they called turkey shoots.”

“You’d take your own gun,” Johnny says. “Most guys had a 22, and whoever got closest to the bullseye won a turkey. One time we went to La Jara and we won 32 chickens, a goose and a couple of turkeys. We hit the jackpot. That was a lot of fun.”

Winters, Rosie says, “Our children would go up to stay with their grandparents at the store. They had more room where they could play — or they’d go sledding. They entertained themselves. They didn’t have television so they learned to read and play with the toys they had.”

Johnny built the Siesta Lodge (now the Redwood) the summer before they married and they built a grocery store, Johnny’s Store (now Red Dawg’s), in 1952.

They sold it in 1964 — Johnny had gotten into the insurance business in 1962, working for Arthur Insurance in Raton. In 1970 he opened John Brandenburg Insurance Agency in Taos (Johnny retired “about 5 years ago” leaving son J.D. in charge).

For a few years in the ’50s, Johnny says, “I measured snow for the Forest Service. I would ski up to measure snow in the Upper Red River Valley. I also measured snow in Taos Canyon. We’d drive over but you had to get out and walk it. Everything you could do to make a dollar, that’s what you did.”