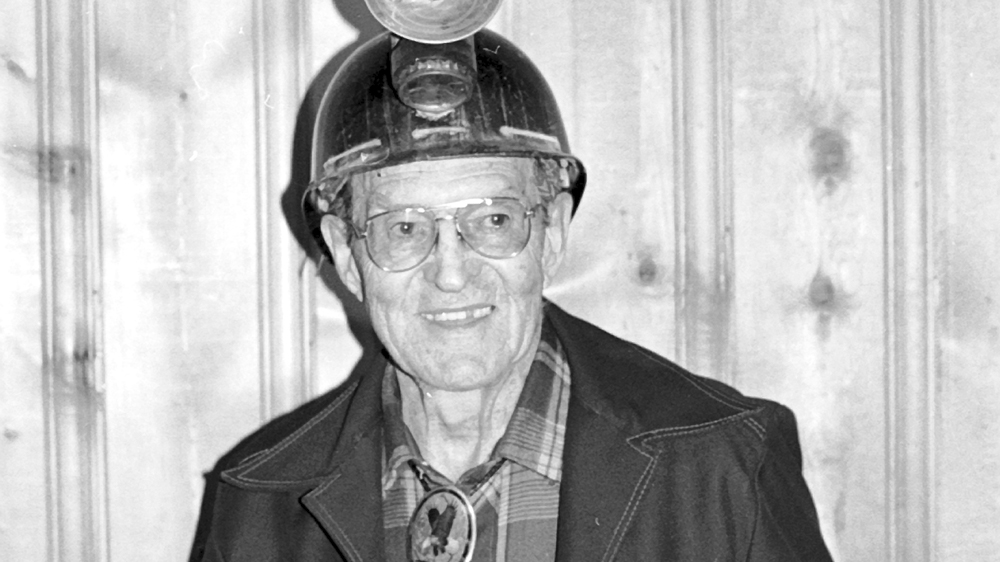 If it snowed overnight in Red River, early the next morning passersby would find Bob Prunty up bright and early shoveling the front porch of the property that had been his home for most of his life. That dedication and work ethic about sum up the character of the man so many gathered to remember last Wednesday, Dec. 17, at the Red River Community House.

Robert W. “Bob” Prunty, 87, died of stomach cancer at Sheridan Manor in Sheridan, Wyoming, Dec. 6, 2008. He had moved to Sheridan in recent weeks to be nearer to his nephew Fred and family members.

Most accounts call Bob a lifelong resident of Red River, though he sometimes seemed pained to admit it wasn’t quite true. In a March 2008 Sangre de Cristo Chronicle Chronicle interview, Bob said around 1920 his family bought 40 acres of “farm land” in Sunshine Valley outside of Questa. They were following the guidance of the site’s developer — a man who apparently forgot to include water rights in his plans.

Prunty’s father found work at the newly-opened Moly Mine while his wife went north to await a birth. In fact, if the doctor in Taos hadn’t been, as Prunty said, “an alcoholic who spent all his time in bars,” Prunty’s mother Ethel might have stayed home instead of traveling all the way to Greeley, Colo., where Bob was born Feb. 6, 1921. Mud and snow kept mother and son up north until Claremont Prunty could retrieve them in the spring.

Bob said, “We moved up to the Moly Mine and lived in a tent half. In 1923 they started building houses for the employees of the Moly Mine.” (Prunty graduated from the eighth grade at the Moly school.) Bob said his family bought property in Red River and moved to town in “1928 or ’29” (though his father continued working at the mine almost until his death in 1947).

Bob’s own history in Red River includes its waning days as a mining boomtown right into its rebirth as a tourist destination and ski resort. He always intended to chronicle his experiences in a book but instead shared his history with friends, journalists and lucky visitors to the Little Red Schoolhouse Museum where he volunteered as curator for many, many years. “He told me the funniest stories,” Bob’s longtime friend, writer Alyce Densow, said. “I’d say, ‘Can I use that?’ and he’d say, ‘No, I’m going to use that in my book.’ Now I’m collecting information from his friends. His summer friends are just a wealth of information.”

In 1998, Bob said, “People have told me I should write a book. I’ve lived here for years, I knew a lot of the miners, ate with ’em, helped ’em in their mines…. At 14 I worked with Uncle Billy Anderson. He said if he could just go four feet that summer he’d strike it rich. He gave me a half interest in his claim for helping him.… It never did amount to much.”

Johnnie Mutz, another lifelong resident, noted (through his wife Hank), “He and his brother George knew every trail around here. They were always traipsing around all the time visiting the old miners and picking up whatever they needed. ‘Course he always offered help to anybody in town that needed it.”

Later, as mining claims failed to bring promised fortunes, enterprising locals like Bob noticed a few folks were interested in Red River for its cool summer nights and abundant fish. “We started getting our first tourists here around 1928 — fellows coming here in the summertime to fish. Fishin’ was real good back in those days. You could go down to the crick and in 45 minutes catch your limit of 25 fish.”

Bob said locals rented abandoned prospectors’ cabins to these first tourists. “They were vacant and somebody said ‘Well, we might as well rent these as let them stand here.’ So we cleaned them up and started renting them. Whoever got there first got the money!” One neighbor even deemed a chicken coop rent-worthy: “He told Rodney Phipps and me if we could clean that up we could rent it. We rented the chicken coop for $1.50 a night for a number of years.”

On their own property, Prunty said, “My brother, George, and I built the first cabin in 1931 or ’32. Then, we’d get enough money to build another one. I think mother got $3 a night and if they brought their own bedding, mother would rent it for $2. I think it was called Prunty’s Camp. They didn’t have good foundations so they started to sink. In the spring of 1970, mother stopped renting them.”

Man of the world … sort of

Prunty says he left as a young man with a friend to try his hand at mining in Apache Junction, Arizona, but very soon decided, “It was just too hot for us. I said, ‘I’m going back to the mountains, what are you going to do?’ And he said, ‘I am, too!’ I came back to stay and worked at the Moly Mine until World War II. Then I quit and my brother George and I enlisted. We got to Denver and they checked both of us and said we had enlarged hearts.”

The military found another job for the boys: in Los Alamos, the city that didn’t exist. Bob said he served in a secret engineering detachment, first running electricity to the community that was built around the Manhattan Project, later working as a machinist. Among other projects, he helped produce armor-piercing shells that could penetrate the then-unstoppable German tanks.

Post-wartime contributions included helping dig the postholes for the electrical poles that brought electricity to Red River, and helping to build the television translator on Sawmill Mountain. “Bob had to carry all that equipment up Flaggy by hand,” Hank Mutz said. “Everyone in the valley could watch the first astronauts land.”

Bob was also a charter member of the Red River Fire Department and before his retirement served as assistant fire chief.

Bob and Esther Ferrell married in 1956 and the duo operated the town’s Post Office from 1958-1985, Bob as postmaster, Esther as his assistant.

Along with other old timers like Johnnie Mutz, Bob was instrumental in bringing skiing to Red River. He helped Stokes Bolton build Red River Ski Area in 1959 and served on its first ski patrol.

Well before that, though, Bob and George were among Red River’s first skiers. “We used to have barrel stave skis. We tried to have skis like Pete Deldosso (a miner with claims up Bitter Creek and Pioneer Canyon near the old Caribel Mill). You took a flat piece of board and nailed a shaped piece of a 2 x 4 on the front of them to make the curve and used heavy canvas straps that you’d tie your foot into.”

Later the brothers got “real” Northland wood skis. “George and I would go up by the Caribel Mill, picnic and hang out awhile, then we’d see how fast we could go back down. I think the fastest time was 27 minutes.”

Prunty’s most enduring contribution to the town of Red River has been his faithful keeping of the weather records for over 50 years. “This station in Red River is one of the oldest in the state of New Mexico,” Bob said. He noted that Ed Westoby had kept records beginning in 1917, and then in 1932 the Prunty family took over. “George got it from Ed Westoby, Mother did it while we were gone during the war, I got it when I came back.”

According to the National Weather Service’s website, Bob had been Red River’s weather observer since 1956 “and before that his family operated the co-op weather station between 1932 and 1956 — nearly 75 years of continuous weather recordkeeping in the Prunty family!” For his faithful service, Bob was honored with the “John Campanius Holm Award” in August 1979 and the “Thomas Jefferson Award” in November 1989.

Before the roads were paved — and regularly plowed — Bob said winters could be difficult in Red River. “Snow meant lots of work. You had to shovel a trail from the cabin to the outhouse and whoever got up first in the morning had to clean up the trail.”

“We always had to bring in plenty of supplies in the fall of the year — at least three months supply of flour, sugar, lots of dried meat. In the spring, my brother George and I were so fed up with salt pork we’d go fishing and once in a while poach a deer.”

Longtime friend and resident Ed Hampton, Faith Mountain Fellowship pastor who officiated at Bob’s funeral, said, “I asked Bob what did they do with people when they died in the winter. Bob said they put them in the icehouse until the ground was thawed enough to bury them. Bob said, ‘Man, I hated going in that ice house!’”

Like his brother George, Bob was an electrical contractor for many years. He also tried mining and logging. His many hobbies included collecting ‘treasures,” making jewelry, panning for gold, painting animals and landscapes, metal detecting and being a rock hound.

But Bob will most be remembered by everyone for the strength of his character. “Bob was a very honest man,” said Fred Prunty, Bob’s nephew. “If he gave you his word, he was going to keep it. He was a product of the Depression. If you were going to build something, why you had to straighten out the rusty nail!”

About Bob’s penchant for collecting, Fred said he remembered his uncle only ever sold a treasure once and when he found out it was too expensive to replace, “He never sold anything again!”

Fred’s wife, Sandy, added, “Bob was a very loving, caring and honest man who was always true to his word. If someone had a need, he was always willing to help them. He never met a stranger.”

Alyce Densow agreed. “He was one of the dearest men I ever knew, so kind, so gentle, so caring. I don’t know if I ever knew a man like him except for my own grandfather.”

During Bob’s funeral, Hampton noted that Bob’s generation clung to the old values: living honestly, taking care of others and walking with humility. Most importantly, Hampton said, Bob walked in faith and lived by the two great commandments: love God and love your neighbor as yourself.

Johnnie Mutz noted that when Don Williams, another longtime resident, died not long ago, “We’d see Bob go over every day to feed Don’s deer.”

Bob is survived by his nephew Fred (Sandra) Prunty of Sheridan; his niece Evelyn (Duane) Smith of New Market, New Hampshore, and their children and grandchildren. He is buried alongside Esther in Alamosa, Coloardo.